Home > Technology > Comparison Between Flutter Vs Kotlin Multiplatform: Which One Should You Prefer?

Comparison Between Flutter Vs Kotlin Multiplatform: Which One Should You Prefer?

Which framework has an edge over the two extremely famous frameworks, Flutter or Kotlin? The topic is frequently spoken and a lot has been written/discussed already over various platforms. However, as the company’s CEO/CTO, you should be doing thorough research to decide between two Flutter and Kotlin for your project. This wholesome blog, we promise will help you make the decision swiftly. We will be discussing their distinctive features, and differences to help you maximize the business advantage.

Cross-platform app development is becoming increasingly popular. The reason is as it allows for the creation of apps that can run on both, iOS and Android operating systems. This is beneficial as 98% of mobile phones globally use these two main OS. The three main players in the cross-platform app development market are Flutter, React Native, and Kotlin. Deciding which one is the best option depends on the specific needs of the project and the skills of the development team. It’s important to consider factors such as performance, scalability, and ease of use when making a decision.

Well, we will start with the basics, move towards comparison and gradually understand the importance of each in various scenarios. Let’s begin

Kotlin is a general-purpose programming language developed by Jetbrains in 2016. It allows developers to share code, data, and business logic across multiple platforms, such as iOS, Android, and the web. This makes it a versatile language that can be used in various environments. It is also known as Kotlin Multiplatform because of its ability to work on different platforms.

Many developers prefer Kotlin over other programming languages because of its simplicity and ease of use. It is designed to reduce the risk of programming errors and crashes, making it a reliable choice for developers. Additionally, it is an SDK(Software Development Kit) rather than a framework, which means that it can be gradually integrated into existing applications.

According to recent statistics, there are around 105,000 apps that have been built using Kotlin. This demonstrates the growing popularity of the language among developers and entrepreneurs. Hence, it is considered the second most popular programming language after Java.

Flutter has become increasingly popular among developers because of its ability to create high-performing, visually attractive apps with a native-like feel. Moreover, its use of the Dart programming language and ahead-of-time compilation allows for fast and efficient app development.

One of the major benefits of using Flutter is its ability to share a single codebase across multiple platforms, including Android, iOS, Mac, Windows, and Linux. Therefore, it is a cost-effective solution for developing apps for multiple platforms.

Above all, Flutter’s widget library, which is built on the concept of reactive programming, allows for the creation of highly responsive and customizable UI. It also has an active and supportive community, which contributes to its growing popularity.

The framework has been adopted by many companies and developers for creating apps in various industries, for example, eCommerce, entertainment, social media, and utility. With its continued growth and development, Flutter is poised to become one of the leading frameworks for mobile app development in the future.

Learn more about why should you choose Flutter and how should you hire Flutter developers.

Let us move forward and get into the details of Flutter Vs. Kotlin

Now we are discussing the comparisons in detail, let us also look at the development prices per hour for Flutter Vs. Kotlin.

Refer to this blog on the cost to hire Flutter developers for more details.

Flutter Vs Kotlin: Which one is more famous?

Flutter and Kotlin are widely popular among mobile app developers because they are open-source and free to use. Both frameworks have their own features and functionalities that make them suitable for different types of mobile app development projects.

Flutter is known for its ability to build cross-platform solutions, making it a popular choice among developers who want to create apps that can run on multiple platforms with minimal changes. It also has a fast development cycle, customizable widgets, and a reactive programming model, which makes it an excellent choice for building high-performance apps.

On the other hand, Kotlin has its own set of strengths that make it an excellent choice for mobile app development. It is considered to be more expressive and concise than Java, which makes it a more efficient language for developing mobile apps. Additionally, it has a large and growing developer community, which makes it easier to find resources and support.

In summary, both Flutter and Kotlin are powerful frameworks for mobile app development and both have their own set of features and functionalities that make them suitable for different types of projects. However, developers have to decide which framework they want to use based on the specific requirements of their projects.

Here are some comparisons in figures available from different platforms.

Flutter tops the chart with more than 83K questions, while Kotlin is at 55K. Clearly, Kotlin is the winner.

How should you select between the two, Flutter Vs. Kotlin?

When choosing a framework, one of the most important factors that developers consider is the ease of learning. Both Kotlin and Flutter have relatively simple learning curves, but they differ in how they approach the process.

Kotlin is considered easier to learn for several reasons. Firstly, Google has made many online courses available for helping developers learn the language. Additionally, Kotlin is highly interoperable with Java, which is a widely used programming language. As a result, developers who are already familiar with Java will find it easier to learn Kotlin. However, currently, Kotlin’s focus is more on developing its extension – Kotlin multiplatform, which may make it a bit more complex.

On the other hand, Flutter has comprehensive documentation and resources available. This makes it easier for developers to learn and get started with app development. Additionally, the framework’s architecture and widgets are designed to be intuitive, which also helps to reduce the learning curve.

Coming to the next questions:

First, is When should you prefer Kotlin?

Now, when should you prefer Flutter?

Moving ahead, Names of applications built using Flutter and Kotlin.

Let us mention some of the popular apps built using Kotlin:

Also, we have a list of Top Flutter development Companies for your easy reference.

It is difficult to determine a clear winner between Flutter, and Kotlin as each platform has its own strengths and weaknesses. The best option for a project will depend on the specific needs and requirements of the project, as well as the skills and experience of the development team.

Both Flutter and Kotlin have a strong presence in the market and have proven to deliver high performance and scalability. Therefore, it is important to assess the specific needs of your project and consult with a professional development team to make an informed decision.

If you are looking for a flutter app development company, feel free to reach out to us. We are always ready to assist you and provide more information about these platforms. Contact us today and we will be happy to help you with your future projects. 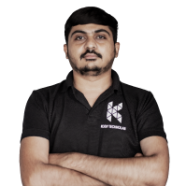 Layer-First Or Feature-First: How A Good Flutter Project Structure Pays Off

What Exactly Predictive Analytics Is And How It Helps Businesses To Grow Faster?

Google Announced Flutter 3.0 And We’re Speechless About These Functionalities

How Blockchain In Finance Is All Set For Financial Revolution?

Flutter Vs React Native Comparison: Will One Outperform The Other In 2023?

De-stress yourself and hire the best Java developers for your project- Here’s a guide you can’t miss.